U.N. humanitarian chief Stephen O’Brien, who just returned from field missions to the affected countries, told Security Council members Friday that the United Nations is facing its largest humanitarian crisis since the organization’s creation. He said that without the necessary funding and full, safe and unimpeded access for aid workers, people will die.

“We stand at a critical point in history,” O’Brien told council members. “Now, more than 20 million people across four countries face starvation and famine. Without collective and coordinated global efforts, people will simply starve to death.”

He said all the regions on the brink of famine have one thing in common: They are conflict zones. 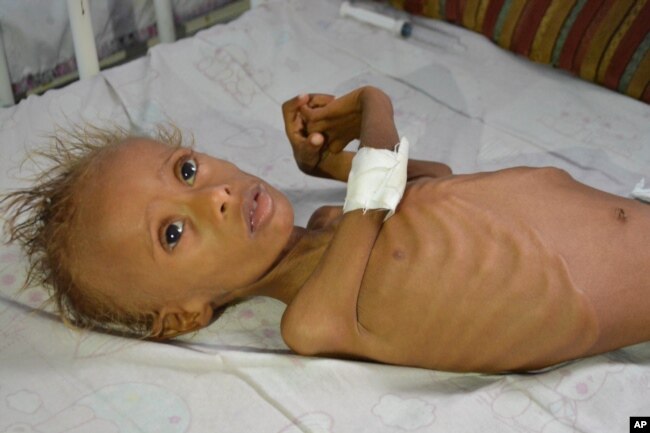 FILE – In this photo taken Sept. 9, 2016, Salem, 5, who suffers from malnutrition, lies on a bed at a hospital in the port city of Hodeidah, southwest of Sanaa, Yemen.

Yemen’s needs are the most critical. It is already the largest humanitarian crisis in the world, with two-thirds of the population, or nearly 19 million people, needing assistance.

The situation in Yemen — already the Arab world’s poorest nation — rapidly deteriorated as the country was plunged into war between Iranian-backed Houthi rebels and the Saudi-backed government.

O’Brien said that, in encounters with people in Yemen, they all told him the same thing. “They are hungry and sick and they need peace so that they can return home,” he said. While he received assurances of improved aid access, O’Brien said all parties to the conflict arbitrarily deny sustained humanitarian access, and they politicize aid.

While trying to reach Taizz, O’Brien’s convoy came under fire. No one was hurt, but it demonstrates the dangers that humanitarian workers face on a daily basis.

O’Brien said the U.N. secretary-general would chair a donors conference for Yemen in April in Geneva, but that the situation is so critical, donors should not wait to contribute. 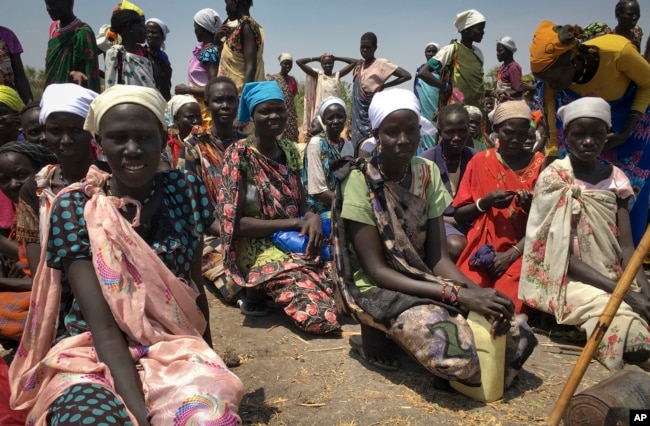 In South Sudan, where a political rivalry between the young country’s two leaders plunged the area into violence more than three years ago, O’Brien told the council that the situation “is worse than it has ever been.”

More than 7.5 million people need humanitarian assistance — up by 1.4 million from last year. More than 1 million children are believed to be acutely malnourished. O’Brien warned that 270,000 of them face “the imminent risk of death” if assistance does not reach them in time.

A localized famine was declared last month in Leer and Mayendit counties, and the country is also dealing with a growing cholera outbreak.

“Aid workers have been killed, humanitarian compounds and supplies have been attacked, looted and occupied by armed actors,” O’Brien noted. But despite government-imposed obstacles to reaching those in need, aid workers managed to reach more than 5 million people last year with assistance. 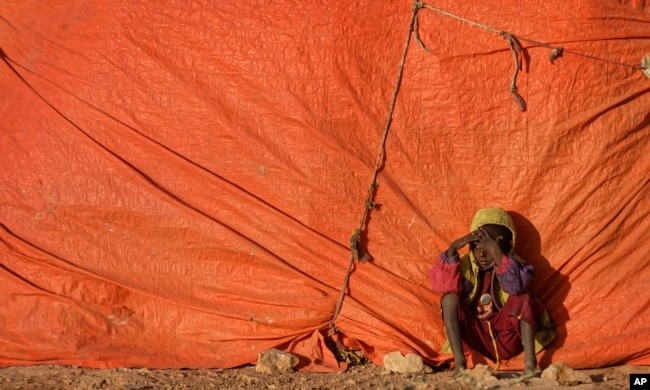 A young Somali boy sits outside his makeshift hut at a camp for people displaced from their homes elsewhere in the country by the drought, shortly after dawn in Qardho, Somalia, March 9, 2017.

In 2011, Somalia experienced a famine that killed 260,000 people. By the time the international community designated the crisis a famine, more than half the victims already had starved to death.

“The current indicators mirror the tragic picture of 2011,” O’Brien warned. But, he said, humanitarians are better prepared today to prevent a famine.

“To be clear, we can avert a famine. We have a committed, clear new president, a humanitarian and resilient track record, a detailed plan … but we need those huge funds now,” he said. 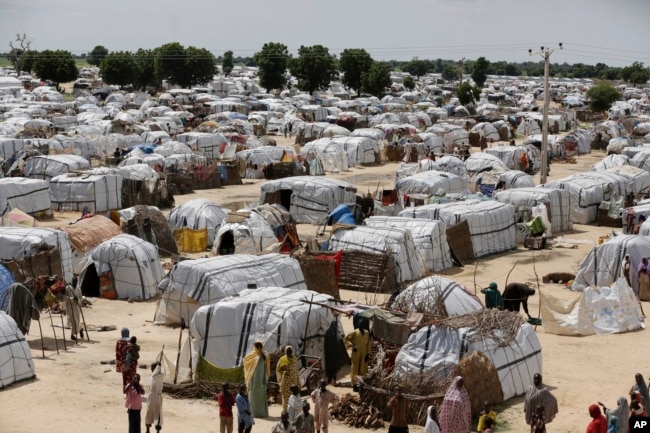 FILE – This view shows one of the biggest camps for people displaced by Islamist extremists in Maiduguri, Nigeria, Aug. 28, 2016.

Three states in northeastern Nigeria — Borno, Adamawa and Yobe — are severely food insecure because of violence and instability stoked by Boko Haram terrorists. More than 8.5 million people in those three areas need aid. More than $1 billion is needed to meet critical needs in the northeast.

“The situation for people in each country is dire, and without a major international response, the situation will get worse,” O’Brien concluded. He said the United Nations and its partners are ready to scale up, but need the access and money to do more.